Many thanks to all of you for attending the Third Reunion of the Maritimes - Newfoundland Labrador branch of the Queen's Own Rifles Association of Canada. You have made this a success story. Our success would not have been possible without the generosity of spirit and commitment of support from two of our finest members, Tom Martin and Ivan MacPhee. This was a very large undertaking and wouldn't have been possible without them. Thanks to both of you for all you've done for us.

To attend the reunion, some of us from the Big Rock drove some 900 km across the island to get to Port-Aux-Basques for the 2345h crossing. From there, it was a - 6 ½ hour ferry ride to North Sydney aboard the MV Joseph and Clara Smallwood. We arrived early in the morning in North Sydney. All of us from the Rock were invited to a meeting and brunch at Tom Martin's place, just a short drive from Marian Bridge. A couple of us took a longer route and when we arrived the spread that Irmgard and Tom put off was both second to none and very welcomed. It was there, after the meeting, we packed bags with goodies in preparation for the meet and greet that night. We made our way to the Armories early to setup tables with programs, bags of goodies and a name tag for each attendee.

At the meet and greet there were, as you can imagine, many stories told. There were groups of people leaning over each other viewing loose black and white pictures and some people had full photo albums. Many pictures were exchanged or shared. We had people there from as far away as one can get in Canada. There were people surprisingly older than anyone else yet able to travel to attend this reunion. Robert Firlotte, somewhere in his 90's came along, from Toronto, with three other women. This is a person with a wonderful outlook on life. We were also honored by the attendance of Herb Pitts who answered some questions at our meetings. He flew in from BC. In fact, we were honored by the attendance of close to twenty attendees who flew all the way form British Columbia to be here with us. Each of them came sporting their magnetic name tags which didn't go unnoticed. Ontario was well represented with about twenty five in attendance.

At 9:00 am the next morning we had our general meeting. After the general routine of the meeting, an election for a new executive was held. Many of the same executive was kept on and a few new faces added. Both John Shapter and John Metcalfe exchanged places as president and past president. Wayne Thomas was elected in absentia to the position of vice president. The other new face to the executive was Jim Sheppard who took over the Kit Shop. The meeting went on for some two hours with discussions ranging from electronic kit shops to the future of the Association.

After the meeting it took some time to find our partners and friends. They were out walking, shopping and doing their own thing. We now had some free time to do some touring, taking pictures or just relaxing if need be.

After our gallivanting we headed off to the Armories a little early to welcome those who didn't get in to the meet & greet the night before and also do some final preparation. Whenever I had a chance I took pictures and/or video. Not enough as I have now discovered.  There were pictures taken by many of the registrants with the view to sharing I hope!

In short order we were all moved outside and piped back into the dining hall. You should have been there to see Robert Firlotte dance-march in to the dining hall to the tune of the piper. The dinner began with a minute of silence by Ed Jackman. John Metcalfe made a toast to the Queen's Own Rifles and also said grace and we ate. The meal, starting with a Chef Salad with French Dressing and a Dinner Roll, followed by Chicken Swiss Cordoned Blue with Mushroom Sauce. Seasoned Roasted Potatoes and PEI Blend Vegetables. And all of this was weighed down with Black Forest Cake and any drink of your choice. There were ample bottles of both dark and light wines labeled with the Queen's Own Rifles marque that followed the theme of the program. As Wayne Thomas was here in heart and not in body; Tom Martin, graciously accepted the task to Emcee the evening’s events for Wayne. 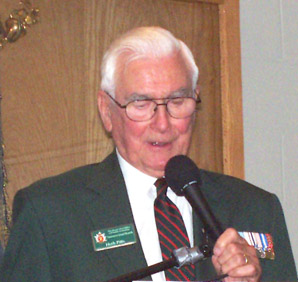 A short and very interesting speech was given by Major General Herb Pitts. He brought greetings from Jim Carroll, Bill Brayshaw, Paul Hughes and Dick Cawling. He also recognized the group from Toronto, Bob Firlotte and the cooperation from Col. Ken Butterworth in assisting in this venue. He gave a short overview of the 150th  celebrations to be held in Toronto and somewhat smaller event to take place in Calgary and Victoria with her Royal Highness Princess Alexander in attendance. After his speech he was thanked by John Shapter who presented him with a gift donated by Tom Martin. John stayed at the mic and gave thanks to each of his executive in turn and presented a little token of appreciation to the planning committee. He presented our founding president, John Metcalfe, with a granite plaque, Two Honorary Membership Cards, one to Orville Cook (in absentia) and the other to Robert Firlotte who took to the Mic and gave a short tale about how he became a soldier.

Before the dance began Clayton Downs auctioned a Jacket, similar to the one awarded to wounded soldiers returning home from Afghanistan. This coveted jacket was won by Ken Marshall. The funds raised were donated to this branch. Mr. Downs also gave a second jacket to this branch. Our thanks go to Clayton, his organization and to the Ontario Branch for their generosity.

Tickets were drawn for various prizes. Joe Yvonne won the QOR plaque. A Shadow Box was won by Jim Sheppard and the door prize, a granite plaque, donated by our president, was won by Casey Willemse. There were others, forgive me, I can’t remember. It seemed there was no end to the prizes.

Our thanks go out to the ladies behind the team of workers of this branch. I have a huge problem with mentioning names for the one fear of forgetting someone. There is no way to thank Irmgard for all she done. It must have been hell dealing with Tom and the burden we placed on him. To Dianne for the time we took Ivan away from you. To the partners behind the executive from the Rock I must say, in case your partner hasn’t told you, we could not have done this without you. Thank you! We love you! 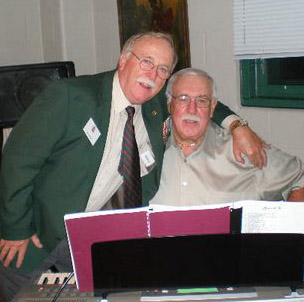 The tables were cleared and the music began. You had to look the second time to see if it was Tom Martin on the Keyboard or his twin brother. The music lasted for about six hours and still some were NOT ready to retire. All who registered, with the exception of two couples and one single made it to the reunion. We were fifteen short of the 100 mark.

All words I heard the next day were nothing short of praise for the weekend. Along with others, Art Muise sent me this email - "Thanks for the great weekend in Sydney. My wife and I enjoyed every minute. It has been a long 43 years since I've seen old friends. Your committee did an excellent job". Thanks Art! What more can one say?